Folks, I suspect that we’re winding down for 2015. We’ve gotten in several hundred miles of local “road surveys” that were incidental to other travel in the last few weeks. Nada. Zip. Zero. That being said, it’s not out of the question that folks doing yard work might find turtles in the next month.

Salvador turned up on October 18, 2014 in the creek bottom. We saw nothing else – road or yard – after that. Alas, Salvador did not turn up in 2015. That’s not a huge worry. Other researchers or monitors have noted that a given turtle might not appear in a study area for a year. Nevertheless, Salvador was the first that we found on our own property after our first spring and summer here. We’d hoped to see him again.

The adults may still be out and about south of here, particularly on warmer days. Several adult box turtles have been found in the piedmont around Atlanta, according to the Chattahoochee Nature Center Wildlife Department’s Facebook page.

What folks are more likely to find for the next month are turtles – particularly hatchlings – in leaf litter or leaf piles in yards.

The little ones may turn up through November. Even adults could have burrowed down into leaf- or brush piles as the turtles prepare for brumation. It may well be that they would be found in torpor into December if it weren’t for the fact that most homeowners quit the yard maintenance after the leaves have finally fallen.

Does that mean that we’re hanging up our box turtle duties for football and holiday food? Not a chance! We have notes to review, photos to organize, and reports to complete. We’ll be looking at all that we’ve seen and done in terms of figuring out what are some turtle “questions” that we can begin to probe locally. For example, what do they eat? How large are their local home ranges? How do their travel patterns change from month to month. And how do these things differ from box turtles that are observed elsewhere in Georgia? Yup, a box turtle monitor’s job is never done!

Well, we have seen more evidence that the turtles are beginning to move after the dog days of August. We were walking along the creek when we happened to glance back and…

…this guy had crept into the trail behind us. It never ceases to amaze how these guys can manage to “hide in plain view.”

At a glance, the males typically have much more colorful heads and legs than females. The males usually have bright red eyes. When you look underneath…

…you’ll see a very distinct “dish,” or concavity, in the plastrons of males. This guy was a healthy 557.7 grams, by the way.

Even though he kept his hind shell closed firmly, you couldn’t help but notice that he has a void between his plastron and carapace on the left rear side. 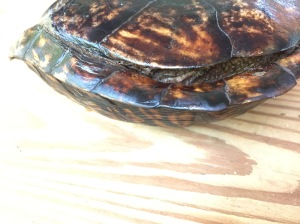 We didn’t try to force the shell open, but a little gentle probing indicates that he’s a “tripod,” or is missing one of its legs. It’s not the first tripod we’ve seen in the neighborhood.

This is a good time to recap some of our observations about the neighborhood box turtle population. We arrived in the summer of 2013 and found only one turtle for months. We saw some elsewhere but not here. We never saw one on our own property until October, 2014, when “Salvador” popped out when we were surveying storm damage. Since then, we’ve found four adults – including Salvador – and one juvenile. Those have popped up in a space of less than seven acres. We haven’t systematically surveyed the lot but our observations indicate that a) the box turtles have bred here recently, b) we have breeding age/size turtles, and c) the density of at least five turtles in around seven acres could be pretty good relative to the 1-3 acre home ranges seen elsewhere. The future (and the turtles) will tell us more.